Volcanoes National Park is the Rwandan section of the great volcanic massif called the Virunga Mountains that straddles the borders of Rwanda, Uganda and the DRC. The massif covers a huge area of over 8,000km², encompassing six active and three extinct volcanoes. The most famous destination in Rwanda, Volcanoes National Park has become synonymous with mountain gorilla tracking safaris and no visit to the country would be complete without visiting these majestic primates. The massif is home to around half of the world’s precious mountain gorillas; some 400 of them making Rwanda probably the best place in Africa for a tracking safari.

Activities in The Park

In Rwanda, gorillas can only be seen in the Volcanoes National Park, Parc Nationale Des Volcans,  As of 2019, there are 8 mountain gorilla groups habituated making it 80 gorilla permits for visitors to Rwanda available every single day.  8 people per group can trek these endangered apes. Susa group is the best to track with more than 45 gorillas!  With a gorilla permit costing US $ 1500 per person per trek, part of your contribution goes to conserving these mountain gorillas.

The Golden Monkeys, are a rare primate species, but they have been given more attention by researchers and by Visitors to Volcanoes National Park in Rwanda who love tracking them. Golden monkeys are small in size around 15 Kilos, get their name from the long golden hair on their backs, and move around the bamboo forest like they are court jesters. They have been declared an endangered species and even protected their number seems to be declining. The two safest and Best Places for Golden Monkey Trekking are Uganda and Rwanda.

Rwanda’s part of the virunga mountain Ranges and five volcanoes including; Gahinga, Muhavura, Bisoke, Sabinyo and Karisimbi. This park is also famous for the mountain gorillas as well as the golden monkeys and common for the gorilla treks to see these endangered and the endemic primates and hikes to the volcanoes.The park boasts over 165 bird species, 17 of which are endemic to the area. This is a must visit park for birding to get the rare species and also enjoy the breath taking Virunga scenery and a chance to view the gorillas.

Dian Fossey was and remains the most widely known researcher on the endangered mountain gorilla, of which only about 250 are believed to still live in the wild. The last entry in Fossey’s diary, which was found in her cabin, read: “When you realize the value of all life, you dwell less on what is past and concentrate on the preservation of the future.” Fossey found murdered in the bedroom of her cabin in the Virunga Mountains of Rwanda in 1985, Today, Fossey is buried next to her dead gorilla friends, many of which had been killed by the very poachers that likely hunted her.

Karisoke Researc Center; the high-quality research centre features an exhibit that comprises interpretive panels about mountain gorillas and the conservation efforts that Dian Fossey pioneered. It also shelters Dian Fossey artefacts, a 3D interactive model of the Virunga mountains and casts of real gorilla noseprints. Overall it makes a perfect introduction to a visit to the gorillas in Rwanda. Through the Karisoke Research Center (KRC), the Fossey Fund currently provides daily protection to approximately half of the remaining mountain gorillas in Rwanda.

Choose one of our 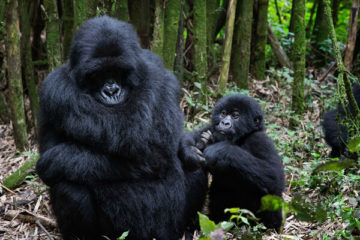 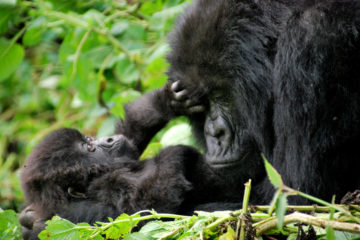